My overall impression of this movie is that I was not at all impressed. She was kind of a jerk, and there was way to much crude language used. I have to admit, there were some hilarious scenes, (the movie did star Hugh Grant after all) and some of the scenes were absolutely romantic.

Dubble Bubble 'comic strips' are more lame than I remember...
Also, the 'fun facts' haven't changed in the past ten years. :P
But they're oh so nostalgic.
My sister and my friends and I used to get a quarter from our moms after swimming lessons to go buy candy with. You could get five pieces of Dubble Bubble gum for 25¢. Wow I feel old.

Email ThisBlogThis!Share to TwitterShare to FacebookShare to Pinterest
Feature: My Discoveries, Nostalgia

A graphic movie about a black man in the mid-1800s. He was a well-to-do free man, a talented and respected violinist living in New York with his beloved wife and two darling children, until he was kidnapped and sold into slavery.
What a powerful story, and how dangerous to be a black person in a racist white world.
Being a white Canadian I cannot imagine what those who have descended from slavery must feel when watching this.
The terrifying thing about this movie is that it still happens today, kidnapping and selling people into slavery, but usually to women and children, regardless of skin colour.

I'm not sure how to rate this movie. It was very well made, so I guess 5/5. I'm not saying I'd ever want to watch it again though.

Tonight's movie was a chick flick. I'm not usually in the mood for romantic comedies, but tonight I was. So, chick flick it was.
It was a hilarious movie. Some of the things 'George' and 'Lucy' said... were just priceless! I wish I was better at remembering movie quotes.
Unfortunately there was way too much innuendo, but there were no 'scenes', at least.

My piano teacher and I have been talking about memorization (among a billion other things). Basically, I have
struggled with memorizing piano pieces since I started playing piano because I have always tried to memorize pieces in a tactile manner (through correct repetition). Mrs. Graham told me some new memorization methods.

Hounds-tooth is called that because the shape looks like the back teeth of a hound. Supposedly it originated in Scotland.
xoxo Lauren at 08:30 No comments:

New Literature: The Shakespeare Encyclopedia: the complete guide to the man and his works

I have been reading some of Shakespeare's plays. While shopping on vacation I found the perfect accompaniment to reading Shakespearean literature: The Shakespeare Encyclopedia. I'm very muchly looking forward to reading each section on each play, because it will help me understand the plays so much better. It can, at times, be hard to follow the story lines because there aren't really any descriptions, save for what the characters themselves say. This book explains the message or meaning behind each play and sonnet. 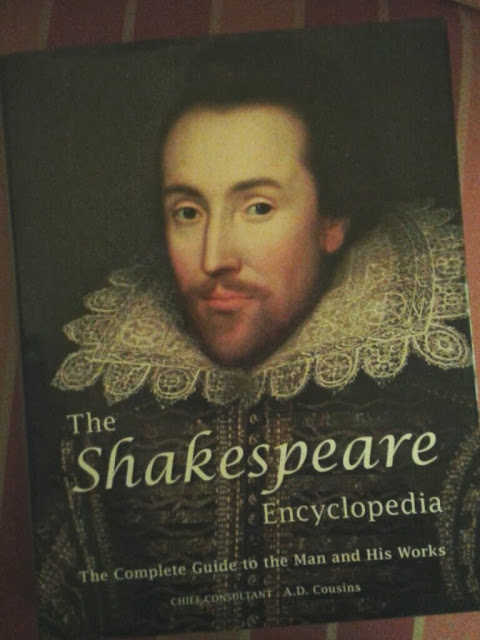 New People: Greg and His Two Labradoodles, Bracie and Marley

The best way to met new people is to compliment them on their dogs. If they are friendly people they will instantly become talkative.
I met Greg during my family's stay in Myrtle Beach this year. He was an older gentleman who walked his dogs Marley and Bracie, two beautiful nine-year-old labradoodles, up and down the beach every day. He introduced himself to me because, as he said, he saw me walking every day, and he likes to get to know the other people on the beach. He had, actually, met some of my family the day before. After he met us, he and his wife made sure to come at least as far as our hotel during their walks, so we could pet Marley and Bracie. Also, Daddy and Mommy want to get a labradoodle puppy in the spring (we'll see how that goes).
xoxo Lauren at 17:00 No comments:

I met Cody during my vacation in Myrtle Beach, SC. He was the lifeguard who watched over the strip of beach my hotel was on. He was young, probably only a few years older than me (although I'm not very accurate at guessing ages). He was blonde and very tanned from working on the beach all summer. He was friendly and talkative, and I enjoyed getting to know him a bit. I found out he is from a town in a valley in the Appalachians Mountains in North Carolina.
I first met him while I was strolling slowly down the beach, looking for shark teeth. He asked me if I'd found any good teeth. I told him no, just small ones, so he kindly informed me that the far pier had some nice big shark teeth to be found.
The next morning (a Tuesday) as I was walking by, again searching for shark teeth, he asked me if I'd gone to the pier yet. I told him no, but I was hoping to go that day or the next.
Wednesday morning he asked me again if I'd made it the pier. I was happy to tell him that yes, I had gone to the pier, and yes, I had found some decent sized shark teeth.
Thursday we talked again. I was very restless that day, and had gone up and down the beach several times, so he was wondering if I was bored. I told him no, but I was restless, and he asked me want that the same thing? I insisted they are different, and he eventually agreed. We had a bit of a conversation, and I started to find that I looked forward to our conversations, as they added something unique to each day.
Friday we talked for probably 45 minutes. I found out he wants to become an underwater welder, a very cool job I must admit.
Saturday we talked about sports. Earlier in the day my family had been throwing around a Frisbee, and he was wondering how it had gone. I told him some of us weren't very good at it (specifically my younger brothers) He asked if I was, so I told him I am decent at throwing it normally, but was still working on fancy throws. He also gave me a new view on soccer that day. I've had little respect for professional soccer players because they always seem like such wimps at every possible chance. Cody said that while he didn't watch much soccer, he knew enough to know that each game half is an hour and a half, no stopping the clock, so soccer players will feign injuries to give their teammates a chance to breathe. Later in the day my youngest brother, Jacob, and I were throwing the Frisbee again. Cody drove by in his golf kart-dune buggy thing, and held out his hands for my brother to throw it to him. Jacob missed, so he stopped and waited in his vehicle while Jacob ran and got the Frisbee. The second time it was a good throw and Cody caught it. Jacob tried to get in the way so Cody would throw it to him, but he threw it to me instead. And thankfully I didn't embarrass myself, I caught it very well.
Sunday was the last day I saw Cody. I didn't walk at the normal time, because we had church, so I missed talking to him in the morning. Late in the afternoon I went wading waist deep, since no one would go swimming with me and it is dangerous to swim in the ocean by yourself. I got out of the ocean about where Cody was, and he asked me if I was enjoying my walk in the water. I told him I'd rather be swimming, but could not persuade anyone to join me. We talked a bit. He said he wanted to swim as far as he could out into the ocean, rest, and then come back. He asked me how far I would be willing to swim. Neck deep? Yes. Beyond where I could touch? Yes. A mile? I said I would swim as far as I could if I had a lifeguard and a flotation device. He said he would do it with me if he didn't have to work.
Yeah right, I didn't know then, he never told me, but that was his last day.
Monday he was replaced by a couple other lifeguards. I figured he just had a day off. But he was gone today too, so I guess he has returned home to his family. He is probably relieved to be done work. And now I am numbered among all the other people he met this summer. Probably forgotten. ( its that sounds bitter, it is not meant to be bitter at all; it is just a fact)
I have to admit: I miss our talks, even though it was only for a week. They added an interesting point to each lazy day.
And so passes another person from my life. I wish I could keep up with all the people I meet: I want to know if he follows his dream of becoming an underwater welder. I want to know if he was actually a Christian, or just mentioned his church softball team because it was part of his childhood, and relevant at the moment. There were questions I wanted to ask him that will remain unanswered...
But people of the present become people of the past, even those we now call our best friends. It is a bitter thing, but life moves on to better things.

To Get Out of This Rut

I am in a rut. I am going to revamp this blog. Document things I learn, things I do, people I meet, what I read/and watch. Do it all faithfully.
The picture is the list of all the things I've written down that I want to do that will help me out of this rut.
To add to it:
• make a 'bucket' list (things I want to do, read, or watch), do something from it at least every other week
• organize my life so I don't feel overwhelmed and stressed and constantly busy
• stop worrying about money. or about overbearing/controlling people. just go with the flow.